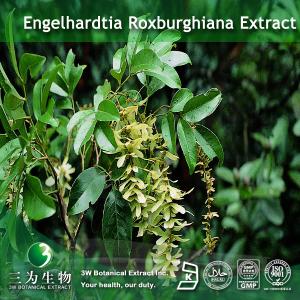 2005). In our previous study, three new compounds and

three antitubercular constituents were isolatedfrom the CHCl3-soluble layer of the root of E. roxburghi-ana . Further phytochemical investigation of this extract has led to isolation of two new naphthoquinones a new butanolide , and a new sesquiterpene , along with four compounds that are isolated for the first time from a natural source, as well as 16 previously knowncompounds . Their structures were established by spectroscopic analyses and through comparison with the relevant data in the literature. The isolation, and structural

STUDY: A theoretical study of the conformational behavior and electronic structure of taxifolin correlated with the free radical-scavenging activity

STUDY: the effect of taxifolin on the serum aminotransferase and tissue adenosine triphosphate (ATP) phosphohydrolase activity to elucidate the possible mechanism of its anti-inflammatory activity.

STUDY: amelioration of CI/R injury by taxifolin may be attributed to its anti-oxidative effect, which in turn modulates NF-κB activation that mediates CI/R injury.